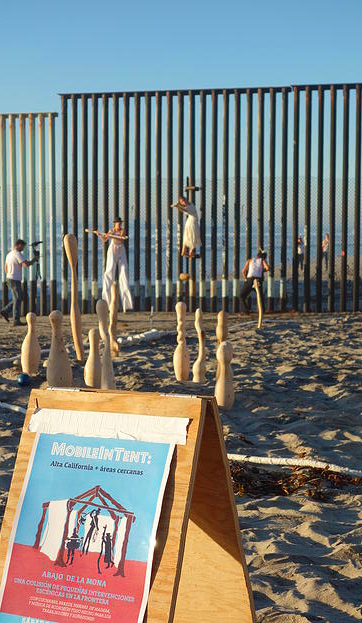 MobileInTent 2014 was a creative production of Ann Schnake and other artists who push beyond the limits the conceptions about frontiers and borders. In this year the MobileIntent project was a collaboration of five artists who were traveling in caravana hitting the roads of Mexico and the United States, going to perform from place to place with wooden sculptors as props and a biomorphic tent.
The sculptures and the tent served the group to compose performances in public spaces pushing against the walls questions about the distribution of resources and the ecology of the area between the Baja and Alta California.
The blunt wall that separates the two countries served as reason to work, from the permeable walls of a tent, on showing the fragility of the current ecological and economic situation of the world. Through discussions during the trip the five artists, Ursula Maria Berzborn, theater director of Grotest Maru and cofounder of the Kunsthaus Kule in Berlin, Robert Gomez Hernandez photographer based in California, born in Chihuahua, Victor Figueroa and Marlet Martínez performing artists from Alariete, Compañia de Artes Vivas from Guadalajara, México; the sculptural works of Ann were activated demonstrating that the walls and the limits may change due to its natural permeability.
Sculptural and video graphic Installations, performative vignettes and collective meals were developed in a collision of theatrical performing acts; playing with spoons and legs of wood in the border by the rhythm of the accordion in an active sculptural setup with intention to alter and challenge perceptions of the bordering between Mexico and the United States.
The group of artists from Oakland , Berlin and Guadalajara meet in a residence at the Santa Fe Art Institute from where they departed to Tijuana, carrying out a series of interventions in New Mexico, Tijuana, Los Angeles and Oakland, finally they end the tour by December 05, 2014 showing the dynamics of the interventions made from the MobileIntent to local people living in California at the Aggregated Space Gallery

Sponsors of the Project 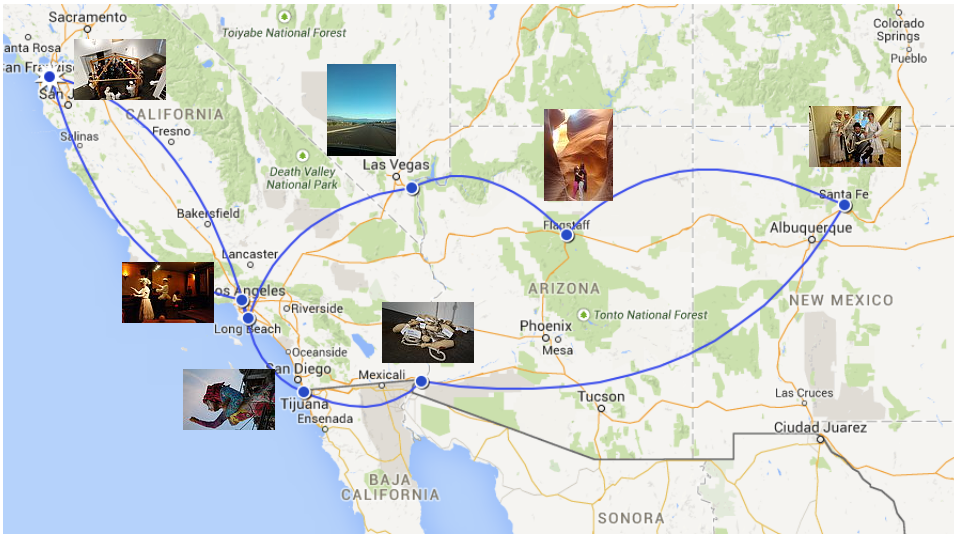